Till recently, permanent residents had to wait three years before they could file a citizenship application, which would take about 21 months to process in routine cases – for a total of five years.

In May last year, the federal government introduced a more rigorous “residence questionnaire” for some applicants, to establish proof that they have actually been present in Canada. Applicants were told the detailed four page form, which must be accompanied by proof such as tax returns, pay stubs, and airline tickets to document even brief absences, would take 15 months to process.

Extra scrutiny introduced by Ottawa to crack down on citizenship fraud means thousands of immigrants will have to wait for years to become full fledged citizens. When a residence questionnaire and further investigation are involved, it is no longer routine. The time needed to process non-routine cases varies from case to case.

For the last few years, the government has admitted a higher number of permanent residents, which has put pressure on citizenship processing times, and the increased scrutiny has produced longer wait times in some cases

Each year, 160,000 people receive Canadian citizenship, but the refusal rate has crept up over the past five years, from 1.4 percent to 3.5 percent. Besides passing the citizenship test, applicants must have basic command of English or French, and no criminal record.

The government plans to revoke the citizenship of 3,100 people, mostly from the Persian Gulf, who had lied about their residency and failed to reside in the country for three (1095 days) of the four previous years, when they submitted their applications.

Some 5,000 permanent residents have also been flagged for being outside Canada, or have never really lived here. So far, more than 600 of these former permanent residents have been removed or denied admission to the country. If they attempt to enter Canada or to obtain citizenship, they will be subject to additional scrutiny, and another 2,500 individuals are also on the government’s watch list for various reasons.

To apply for Canadian citizenship, you must be at least 18 years of age, do not have any criminal prohibitions, be a Permanent Resident of Canada, must have resided in Canada for at least three of the last four years and must pass the citizenship test.

You cannot become a citizen, if you are in prison, on parole, on probation, or under a removal order, have been convicted of criminal offence, or an offence under the Citizenship Act, in the three years before you apply, or are under investigation for, are charged with, or have been convicted for a war crime or a crime against humanity, and had your Canadian citizenship taken away in the past five years.

As the Canadian immigration and citizenship matters are getting more complex year by year, there are many people caught up in this, who make a mistake and do not realize that their actions could have severe consequences, even refusal and deportation. We at Swift Immigration Solutions Inc. have the ability and authority to advise and assist you for your Citizenship application. We are licensed Immigration Consultants, and members in good standing of the regulatory body, Immigration Consultants of Canada Regulatory Council(ICCRC). You can contact us by phone, or use the form in the website. 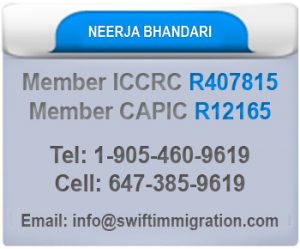